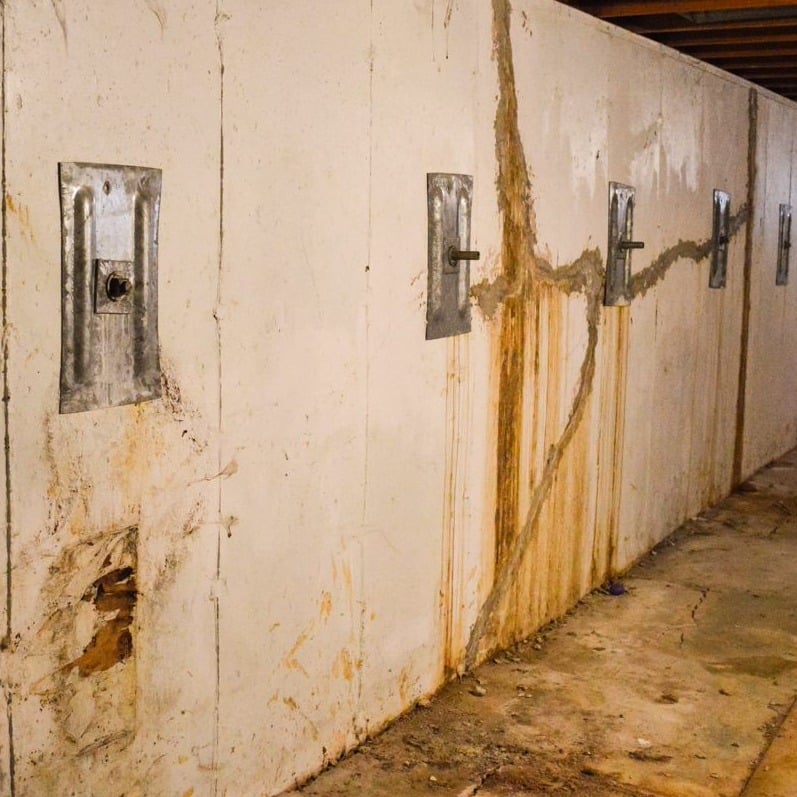 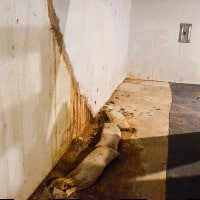 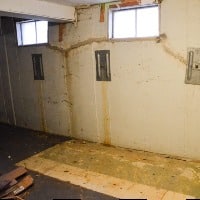 Recently, we were at a  home in Lake St. Louis where a customer had previous work completed by another Lake St. Louis foundation repair company that was supposed to take care of their foundation wall problems and waterproofing. Unfortunately, that just didn’t happen. So we went through the process correctly this time by taking care of the basement walls, making sure there was no water in the basement, and giving this St. Charles county customer the peace of mind that they really wanted in the first place.

Once we went down inside the basement, this customer had extensive work done by a so-called local company that’s part of a national franchise. The problem with using somebody that’s giving you a basement system that’s really not from our area is you can end up with problems like this customer ran into. Being a local foundation company is just one of many reasons why homeowners have chosen Helitech for five decades now. We know how to take care of the problems in the areas we cover because we live there. Like this customer searching for a foundation repair company in Lake St. Louis. This customer wanted someone local. Since our estimators live in your town and the company is solely owned and operated here out of St. Charles county, homeowners trust Helitech as their local expert. A huge issue we’ve seen is when national companies come into regions where they are not local to, they end up pushing homeowners to invest in a certain type of basement system, that may not be the actual best option for the type of soil or climate.

This Lake St. Louis homeowner noticed a crack in their concrete wall in the basement. The concrete basement wall was cracked and opened all the way back up and even some of the plates on the anchors were loose. These wall anchors were continuing to move, even after they spent all this money with the previous company to fix that exact problem. It’s a frustrating problem for a homeowner and we happily come in and fix it, and fix it right the first time for our customers.

Part 1 of our Full Project Highlight

Our Helitech crew excavated out the trench to actually show you what a deadman anchor (also known as a plate and rod) looks like when it’s installed. Typically, a rod is 3/4 inch diameter, it’s very thin and it’s actually just driven into the soil with a small piece of equipment inside. The problem you run into when using a deadman anchor is that the rod actually gets driven out.  This particular deadman anchor must have hit a tree root some other obstacle in the soil. This customer’s anchor was extremely bent and can get very crooked at that point which obviously lessens what it can hold and what it’s able to do. It was visible to our technicians that the other company poured a concrete hunch to hold the anchor in place. The problem there is it’s only two feet around and it’s in the same soil that was moving against the wall in the first place. This is where the other company went wrong and caused the issues for our team to come out and fix.

Our engineers install the helical anchor by operating at a 10 to 15-degree downward angle away from the house. This gets us into the inactive soil which actually holds the wall so that this doesn’t continue to happen and a homeowner doesn’t have to do it twice like in this situation.

This Lake St. Louis homeowner decided to permanently take care of a water problem that they supposedly had already paid somebody to do. In the video above, you can see how badly the floor cracked up after it was poured back and that’s only because the concrete was poured so thinly and so poorly that it allows it to crack and break out. Another thing you’ll see with the Helitech system when we pour our concrete, we pour it back to the original thickness so that you don’t have the same issue as these customers.

Read on to learn how to fix this home and really how to heal this St. Charles County home for good by a real Lake St. Louis foundation repair company.

Why Are Helitech’s Wall Anchors Superior?

What you’ll see with the helical anchor is that it actually gets hydraulically driven or screwed down into the soil. What that’s going to allow us to do is pass through the poor soil as it cuts down and that’s what’s going to get us into that inactive soil that makes our anchor superior to any other anchor. You’ll also see as the anchors are going in they’re going in at about a 10 to 15-degree angle. What that means is we’re not only going out away from the house but we’re going at it down where it’s sloped so that again we get past the bad soil.

Our helical anchors have been installed on this particular wall and we have removed the previously installed anchors that were failing. Then, the crew straightened this wall as much as structural integrity will allow. The team installed C channels on this wall because it is so broken up we want to be able to span each piece of the concrete so that you can see how much the wall has pulled back. Then, we set up a couple of visual aids for you: these boards that we’ve screwed into the floor joists–they’re tight to the concrete wall right now so as we pull the wall back straight you’re going to be able to see the gap that’s created once we get the wall back into place.

The guys have done a great job. They actually pulled this wall back to where it’s perfectly plum. It’s exactly where we want it to be. The walls are straight now as it was the day that it was put in. You can see up here at the top where we had our wood strip how much we’ve actually pulled that wall back which is a little bit over 2 inches in that exact spot. At this point the customer’s wall is completely plum, it’s structurally sound. It’s never going to move again. Then, unlike the basement system that was in there before– they’ll never have to do this again.

Once everything is done and in place, the guys are going to backfill the soil back into place and we don’t have to worry about water intrusion into the basement because we have our hydro drainage system inside of the house that is going to make sure that there’s never any water in this basement any longer so this customer is going to be fully protected from wall movement and water now that Helitech has healed their home.

My basement was bad for leaking water. After getting all the small details out of the way, the crew showed up on time and called before they got here. I went down many times to take pictures the crew was happy to show me and explained what they were doing and how the system would work. And now my basement looks a lot better then it used to and it’s staying dry.