Should You Install a Vapor Barrier in Your Crawl Space?

Moisture problems are a headache for homeowners, no matter where they’re located.

Water in your crawl space can cause a whole host of problems that can threaten the stability of the crawl space and cause structural damage to your foundation walls and floor joists; if the crawl space air enters your home, it can even affect your home’s air quality along with your family’s health.

It’s extremely important to eliminate any standing water in your crawl space, but then you’ll need a method to prevent moisture from returning. 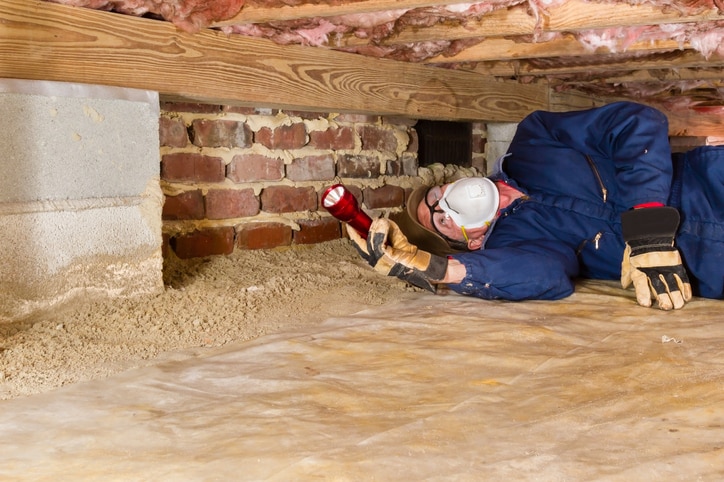 How Water Gets in a Crawl Space

Most crawl spaces have dirt floors. Moisture comes up through the soil on a regular basis (and especially after heavy rains). This moisture can hang around in the crawl space and lead to problems.

Many years ago, it was thought that fresh air circulating throughout the crawl space would allow water vapor to evaporate. Building codes even dictated that crawl spaces should be ventilated. and until air conditioning became commonplace in most American homes, that didn’t present too many problems.

However, now that air conditioning is so common, venting a crawl space can have the opposite effect. Typically, HVAC ductwork is in crawl spaces. When the cool air and cold ducts come in contact with the water vapor in your crawl space, this creates condensation.

As condensation increases, there will be a buildup of excess moisture, meaning your crawl space can become a perfect environment for wood rot, rusted metal, mildew, mold growth, and infestations of termites and other pests. If your crawl space also has fiberglass or foam insulation, they can also trap moisture, adding to your issues.

Now, we know that fully sealing a crawl space is the best way to prevent these problems.

The most common ways of waterproofing to prevent excess moisture buildup in your crawl space are with a vapor barrier or full encapsulation.

Vapor Barriers and Their Issues

In order to spread a vapor barrier more easily, many crawl space repair companies choose a 4 to 6 mil thick sheet of plastic as their vapor barrier. This material is easy to work with but is prone to tearing. A reliable barrier should be at least 12 mil thick, if not thicker.

They don’t keep all the water out.

The point of a vapor barrier is to keep water from getting in, but they aren’t foolproof. Water doesn’t only come from the ground; in fact, moisture is primarily airborne! So, you have to assume that due to air flow, window or pipe leaks, or extremely heavy rains, some moisture will still be in your crawl space. That’s a problem within itself.

Water that does get in can’t drain.

As mentioned, many vapor barriers do actually allow some water in. If this happens, the water does need a way to escape, otherwise you’ll end up with mold, mildew, or pests.

It’s not a sealed system.

Typically, vapor barriers lay across the crawl space floor in an overlapping fashion, which keeps water from seeping up from the dirt floor. However, they don’t usually extend up the walls or the columns of the crawl space, which leaves plenty of room for moisture to enter.

Waterproofing a crawl space is a no-brainer, but you can’t just keep water from getting in. As mentioned, with a thin vapor barrier, you may encounter issues with air flow, pipe leaks, or HVAC ductwork. Unless you use a more comprehensive crawl space waterproofing system, you will have no way to address these issues.

When you seal your crawl space with a vapor barrier, you have pretty much the same situation as before: a dark, possibly dank crawl space, just covered in plastic. This plastic can trap odors, gases, pests, and rodents (and when those pests or rodents die, there are even more odors!). The odors and gases can enter your living space, which will only increase the health issues you’re trying to prevent.

Unlike vapor barriers that are only overlapped over the crawl space floor, encapsulation systems cover the entire floor, all of the walls, and wood framing. This creates a much stronger barrier that completely resists moisture, mold, mildew, and pests.

Choosing Between a Crawl Space Vapor Barrier and Encapsulation

To choose between one of these two waterproofing methods, take the following into consideration:

How big is your crawl space? The size of your crawl space will affect material costs. If you want to invest less upfront, a vapor barrier may be for you (just be aware you may need to pay to replace it down the road).

What is your budget? Full encapsulation is a larger investment, but it has been shown to be much more durable and longer lasting. It is often worth it for homeowners to invest in reliable, long-term waterproofing now instead of choosing a vapor barrier that may need to be replaced in the future.

What is the state of your crawl space? Your crawl space may not have all the same moisture issues. If you live in a relatively low-humidity area or you don’t have large concerns about excess moisture, a vapor barrier may be all you need. However, in most crawl spaces, including those in Helitech’s service area, where humidity is variable throughout the year, encapsulation is typically the better choice.

Waterproofing Your Crawl Space with Helitech

When you need crawl space repair and prevention, you can trust Helitech to choose the right method for you.

In our 32 years of experience, we’ve found that a full crawl space encapsulation, insulation, a perimeter French drain and sump pump, and an energy-efficient dehumidifier is the perfect combination to waterproof your crawl space for decades to come. If you’re struggling with water beyond your crawl space, check out our basement waterproofing solutions here.

Would like to thank Dave C and Brad K for making the 3-hour trip out to Washington, MO. They were extremely professional and efficient. We appreciate all of their hard work. They explained the system that even if the black edging wasn’t perfect against the wall it would still catch any water that may come in. they cleaned up thoroughly. Yeah! 🙂 from the excellent sales representative to the finished product was a pleasant experience 🙂 Amazing a company that actually does what they say they will. thank you Helitech 🙂

Fill out the form below to request an appointment or ask us a question.

Find out more about our pricing and available finance options.

GET A FREE QUOTE

Explained everything, cleaned up, showed measurements, had no problems

Heal Your Home With Helitech
GET A FREE QUOTE