Helitech installs the industry’s best drainage system on the market today as we guarantee it will not fail or become clogged and will protect your basement from leaking.

Your basement may already have a drainage system that was installed when the house was built. These type systems inevitably fail as they become clogged or do not relieve enough hydrostatic pressure against the foundation, which causes more problems than does good.

Helitech uses the patented Hydraway Drainage System to provide the ultimate protection against incoming water to your home. The Hydraway System removes up to 70% more water than conventional rock and pipe “drain-tile” systems and is guaranteed not to clog!

Hydraway has built a great reputation protecting investments of homeowners through innovative technology in waterproofing. The Hydraway Waterproofing System is the fastest available in the industry with 75% available open space. Hydraway will capture water before it enters your basement, relieving hydrostatic pressure, resulting in a dry, comfortable area.

Fix the damage at its source. Call in the professionals.

Why use the Hydraway System?

The patented system has built a great reputation protecting investments of homeowners through innovative technology in waterproofing. Hydraway can be installed in your basement, crawlspace, used for exterior drainage, and installed behind retaining walls.

The proven performance of Hydraway is exclusive to Helitech and is made in the U.S.A. Utilizing a four-step process, Hydraway and Helitech protect your largest investment.

Learn more about the Hydraway System by downloading our free brochure.

The Hydraway waterproofing system utilizes three components to remove moisture and keep it out of your home. The components are: 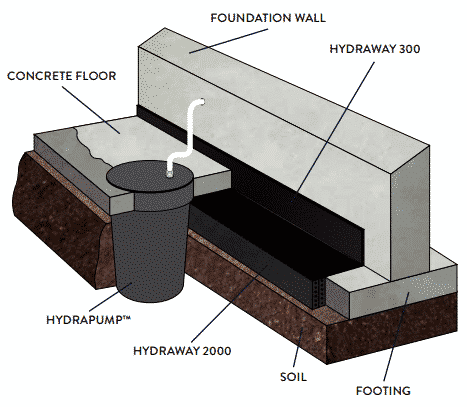 The Hydraway Drainage System is ideal for residences that suffer from poor drainage and leakage issue. The Hydraway Waterproofing System offers a better investment than the “French” drain or “drain tile” methods because it is a permanent solution that has zero instances of clogging or backed up water in the two decades Intech Anchoring Systems has been installing the product.

The specially engineered design of the Hydraway 2000 permits high flow rates for rapid dewatering of the soil, while effectively preventing passage of soil particles. It is made of a heavy-duty, clog-resistant geotextile fabric, permanently bonded to lattice core of 75% available open space for water. The design of Hydraway allows it to relieve hydrostatic pressure by acting as a shallow underdrain. The Hydraway 2000 is a cost-effective and superior performing replacement for the “French” drain, or other conventional “drain-til” systems.

Hydraway 300 captures water at the foundation’s weakest point — where the footing, the wall, and the floor meet. Hydraway 300 is widely used to relieve hydrostatic pressure against subsurface structures. This system provides a built-in protection board in a one-piece construction.

Once the Hydraway System drains water from the basement or crawlspace, the water needs somewhere to go. Once installed, the Hydraway is connected to a sump pit that is situated within the soil. Inside the sump pit contains a sump pump that pushes the water up and out of your basement through the discharge hose. The Hydrapump captures water from the Hydraway system and routes it through drain pipes to the exterior of the home.

We’ll give you, the homeowner, a free quote for your basement waterproofing.

We’ll get back to you with a cost-effective solution.

Randy H did a wonderfull job

Fill out the form below to request an appointment or ask us a question.

GET A FREE QUOTE

I just wanted to let you know how pleased we are with the job your team did with our project.

We initially contracted with Woods Basement Systems to solve our issues. After a year and numerous attempts to get the job completed it was not! I reached out to them many times and finally figured out they didn’t want my business. So I emailed your company. Your sales rep assessed the project and we contracted the job on 6/11/17. The job was completed today, 7/24/17.

We were pleased with the sales rep, Chris Watson. He was professional and courteous. I texted him several times and he always responded in a timely manner. The leveling crew, Dean and Cory, were fantastic! They were friendly, informative, and both were professional. They worked diligently to complete the job. I will recommend your company to everyone based on this experience. The only regret I have is not contacting Helitech first! If I had the job would’ve been completed a year ago…lesson learned!

FAQ: Why is there water in my crawl space?

No More Water For This Customer – Bloomington, IL Basement Waterproofing

Heal Your Home With Helitech
GET A FREE QUOTE

If you’re Kevin McCallister setting booby traps for Harry and Marv, a cracked foundation and wet basement may come in handy. If you’re not an 8-year-old kid stuck Home Alone while your family vacations, your foundation issues need to be addressed before they get worse.

Mention HOME ALONE throughout December and get 12 months no interest or take 15% ALL SERVICES.